With a rollover when you pass your cursor over one image another image appears.
Move the cursor away, and the first image reappears.

Question: What kinds of information are best presented with rollovers?
1. In the first example, both images are from Augustus Sohon's drawing of Cantonment Stevens, done during the building of the Mullan Road.
Move your cursor over the Sohon image below and a second image will appear.

Lesson: The visual effect may be interesting, but no particular lesson is involved.

Question: Why is this rollover less instructive than the ones below? 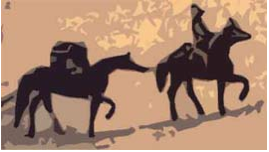 2. In the second example there is more of a message or a lesson in the rollover..

Lesson: The image below is Augustus Sohon's drawing of the Pend Oreille mission. Note that two cultures are present in the first image as indicated by the Indian teepees and the white cabins. But look again, and you will see that the cultures are more various. Move your cursor over the image and you will see a close up of the teepees, indicating that at least two Indian cultures were present with different building styles.

Question: In what way is this rollover more instructive that the one at the top of the page?

3. In this example also there is a lesson, an illustration of past and present.

Lesson: About 150 years ago Augustus Sohon drew Palouse Falls, which lay near the route of the Mullan Road. In 2003 we photographed the same scene. Move your cursor over Sohon's drawing and the rollover takes you to a picture of the base of the falls in the twenty-first century.

Question: How could this rollover be improved? Would the effect be enhanced if the rollover went to a photograph taken from the same position from which Augustus Sohon painted the picture? 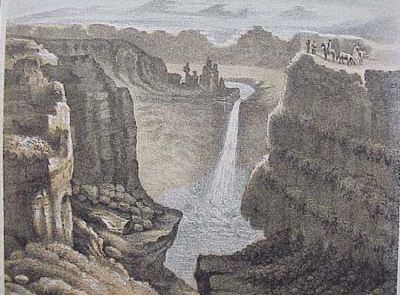